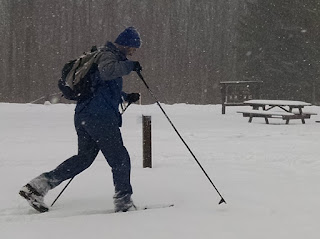 One comment we sometimes hear about Trackers is that they're heavy. For the record, one of our skishoes weighs about four pounds, meaning a pair weighs eight pounds. Compared to snowshoes, this is heavy. But compared to skis, it's not. Snowshoes are typically made of a tubular aluminum frame with webbing strapped between it, so they're inherently light weight.

It seems that people see our skishoe as looking like a snowshoe, so they expect it to weigh the same. But while we call it a gliding snowshoe, the skishoe is actually a ski platform. When people snowshoe, you notice that they walk in them, picking their feet up in pronounced fashion to clear the snow. I've noticed that some people do this when trying a pair of skishoes. But as you get more experienced with Trackers, you'll keep them on the snow more and ski them with the kick-and-glide stroke used in cross-country skiing. When you do this, you'll notice they feel much lighter and the weight is not such an issue.

Popular posts from this blog 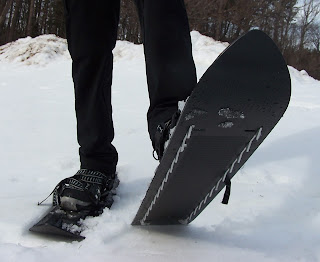 Over the past several years, a seemingly new winter sport has emerged that combines skiing and snowshoeing. It has gained traction (literally) as snowshoes have become more popular and high tech over the last 20 years. It has no official name, so many of us just call it skishoeing. Some of us label the instruments sliding snowshoes or hybrids. But skishoeing is actually not that new, as a search through patents reveals that inventors have been coming up with myriad designs for many decades. Independent souls have tried to commercialize them along with a few major players. No trade group for skishoeing exists, maybe because no standard design exists like with skis or snowshoes. Indeed, all skishoes currently out there are different. Some are more like skis, while others are more like snowshoes. They all basically grip while climbing, then glide on flats and coming downhill with varying amounts of turning ability. With a wide platform, they have more flotation for handling p
Read more

How Do You Make a Skishoe? 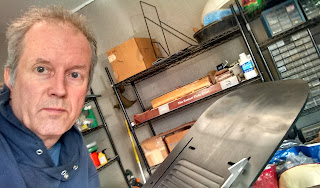 We advertise that our skishoes are handcrafted in central Pennsylvania. But what does that mean? How do we do it? It may sound simple in theory, but it gets complicated. I must confess that not every part or component of a skishoe is made here, or even in this country, but we do our best to keep things local, or at least made in the United States. The main component of our skishoe is the ski, actually a hunk of high-density polyethylene (HDPE) plastic, the same #2 material you see in common plastic jugs. For small quantities, we have the ski machined from 4’x8’ sheets of material by MPC Industries, a machine shop in Lancaster, PA. Machining doesn’t lend itself to offering different colors. The material comes in black and red, and black is cheaper, so we go with that to keep our costs down. The skis are machined straight, so once we get them in house, we form the tip on the front end. We do this by heating it with a torch and then bending and holding it in a fixture
Read more