Showing posts from December, 2018
Show all

Preparing for your Skishoeing Adventure 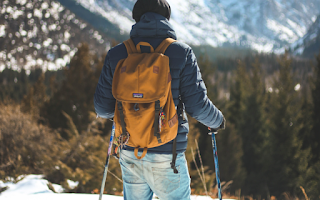 Skishoeing is an exciting activity that many look forward to all year round. Enjoying the crisp outdoor air and taking in the beautiful snowy landscapes is the perfect way to spend a winter day. However, being ill-prepared can make this experience a little less enjoyable. We are providing a few things to remember before heading out in the snow! Staying Physically Equipped One way to make skishoeing more enjoyable is by increasing your overall fitness. While general physical ability is beneficial for all sports, snow sports can be a little more challenging due to the higher elevation and colder, thinner air. When conditioning yourself for this sport, make sure you are doing a lot of aerobic exercise to keep yourself from getting winded too quickly. Ensure that you have strengthened your arms, legs, and back to help with endurance, motion, and carrying a backpack. If you want to learn about the health benefits of skishoeing, check out our previous blog post. Choosing the Right
1 comment
Read more

Skishoes Coexist with Skis and Snowshoes 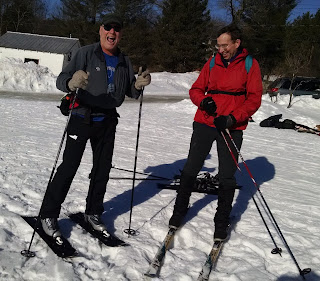 A few years ago, I was cross-country skiing at Green Lakes Park near Syracuse, New York when we came to a rest stop along the trail with a bench. A lady was sitting down taking a break, and we stopped for a minute to regroup and made conversation with her. She was on skis, alone, and remarked, “I’m waiting for my friend. He’s on snowshoes.” This pointed out the difference between snowshoeing and cross-country skiing. It stands to reason that because skiing involves gliding and snowshoeing walking, you go faster on skis than you can on snowshoes. As a result, skiers and snowshoers just don’t mix. Enter skishoes . Because they have a glide component, skishoes fall about half way between skis and snowshoes on the speed scale. This means they can legitimately hang with either group. I ski with the Kick’N Gliders, a cross-country ski club out of Harrisburg, PA, that runs frequent trips to New York, New England, and Canada. Occasionally, on a day-long jaunt through the fores
Post a Comment
Read more
More posts